An 8km-long lake filled with sticky black tar is the most extreme example of the pollution that has built up around the desert town of Zhanaozen, in western Kazakhstan, since the supergiant Uzen field was discovered more than half a century ago.

The lake was formed in the 1970s when an accident ruptured a pipeline, and the tar has been trapping birds and animals ever since. But now entrepreneur Bauyrzhan Zhanybekov wants to finally clean up the mess – and aims to sell the recovered oil.

His technical solution is based around two decanter centrifuges that separate oil waste into water, solids and marketable crude. Zhanybekov can now process enough waste oil every week to fill an Olympic swimming pool. The solid residue, or “cake”, is undergoing tests and may be used to replace coal at a cement factory in the region.

FACTS - A brief history of oil in Kazakhstan 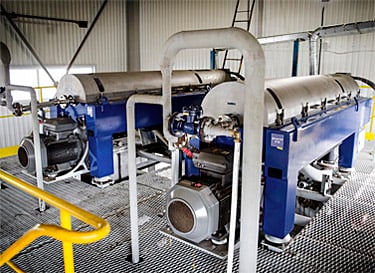 We realized we could not only improve the quality, but increase the capacity many, many times."
KAZAKH WASTE OIL ENTREPRENEUR
BAUYRZHAN ZHANYBEKOV

My first impression when I saw this fifteen years ago was 'how beautiful'. The nature is amazing. I was shocked at how it had been polluted."
BAUYRZHAN ZHANYBEKOV

All Industrial water and waste treatment